This week was a little shorter than usual because of parent conferences but several classes got to enjoy some Thanksgiving stories.  Fifth Graders heard Balloons Over Broadway by Melissa Sweet.  The illustrations in this book are so beautiful and such an integral part of the story that I decided to take photos of each one with my iPad and make a Keynote.  Then as I read the story, the illustrations were projected on our TV.  The students really liked this!  The book and the story are wonderful and really give a background to the famous Macy’s Thanksgiving Day Parade.  I think students who watch it on television next Thursday morning will have a new appreciation of what went into this amazing tradition. 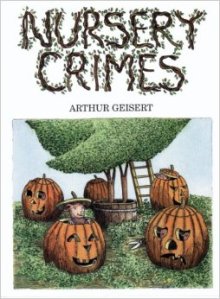 Kindergarteners heard Nursery Crimes by Arthur Geibert and were so happy that the villain in the story got his due at the end.  And they all know what the word topiary means now!

First graders heard Hide and Seek Turkeys by Judith Ross Enderle and Stephanie Jacob.  This is a great counting and rhyming book and we had fun discussing the interesting clothing–waistcoats, pantaloons, and britches!

Second graders heard a Thanksgiving Day classic, A Turkey for Thanksgiving by Eve Bunting.  They loved learning what a “twist” is and loved the ending of the tale. 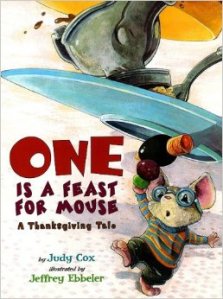 Third Grade heard a charming Thanksgiving book, One is a Feast For a Mouse by Judy Cox.  As with her other books, the illustrations by Jeffrey Ebbeler are so rich and vibrant–perfect for a read aloud.  This is a great book to use for the visible thinking routine, Plot Prediction.

I missed Fourth and Sixth Grades this week due to early dismissal for conferences.

Hope you all have a wonderful Thanksgiving! 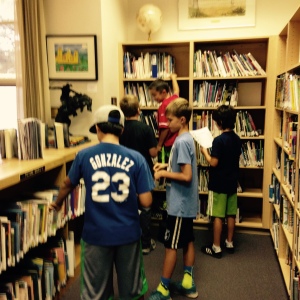 Library scavenger hunts are such a great way to get students going all over the Library in search of books.  They really find out where books are located and have fun at the same time.  This week fifth and sixth graders did our BOOKS scavenger hunt using the sheet below.

They have to find the titles of books that fit the categories.  I wrote in some location hints along the right hand side.  I let them work in teams of two or solo but the rule is they can’t talk while they are working and I will answer questions but only with the answers yes or no.  They really enjoy this and even get a little practice with parts of speech as well.  I got this from Educating Laytons several years ago.  It’s great because it can be used several times throughout the year.

Also in the Library this week….

First Grade–First graders heard Frances Dean Who Loved to Dance and Dance by Birgitta Sif about a girl whose self-consciousness gets in the way of her love of dancing.  We talked about how she solved her problem using our story rope and ways that they can overcome shyness if they want to.  The illustrations are beautiful!

Second Grade–Continuing our comparison of the plot of a story, this week second graders heard The Three Ninja Pigs by Corey Rosen Schwartz.  We used our visible thinking routine, Same, Same, Different not only to compare the story lines but also to set up the story by comparing and contrasting the three little pigs in this version.

Third graders were treated to a funny story with a slightly serious message:  We need to unplug from our devices from time to time!  In When Charlie McButton Lost Power by Suzanne Collins, the main character is devastated when a power outage takes all his fun away.  Or so he thinks.  As he goes from furious to accepting he learns how much he actually likes his little sister and how nice it can be to “unplug.”  We used the visible thinking routine, 10 minutes before, 10 minutes after, to make predictions about what might happen in the story before we read it. 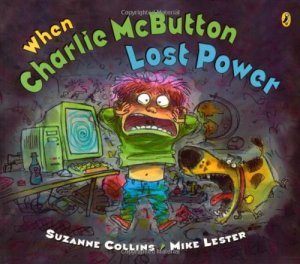 Fourth Grade–The Talking Eggs by Robert San Souci is one of my favorite books to read aloud.  Such great text, with a little dialect, such wonderful pictures, and the plot grabs their attention almost immediately.  We did the visible thinking routine called Character Trait Portrait to talk about the different characters in the story.  We also looked for story threads in other folktales.  I placed copies of pictures of the main characters, Rose and Blanche, on the whiteboard and students used yellow stickies to surround them with their character traits.

This week fifth and sixth graders were introduced to the Digital Citizenship Survival Kit.  I got this great idea from a wonderful blog called Comfortably 2.0 .  Here’s a link to the blog post: http://comfortably20.blogspot.com/2013/08/the-new-and-improved-digital.html

(I made a one adjustment for the elementary age so instead of tattoos, I used fingerprints)  I put all the items in a large gift bag and pulled them out one by one and asked students to figure out what each one symbolized when they thought about what it meant to be a good digital citizen or to have good online behavior.  The most powerful one is the sheet of paper.  I save it for last. The directions are to have a student take it, wad it up, throw it on the ground, and stomp on it.  Then they pick it up and unravel it.  Then the student apologizes to the paper for destroying it.  I then tell them that the paper represents someone’s heart that has been cyberbullied.  You can apologize all you want the the emotional scars that remain don’t go away.

You could have heard a pin drop…not normal for 5th and 6th graders.

Digital citizenship and good online behavior are such an important concepts and ones that can be hard to discuss with kids who think they already “know everything.”  The props, this visuals, really make this easier and more effective.

Also in the Library this week….

First Grade–First graders worked on making inferences with a fun book app called Nora and the Noisy Neighbours.  Nora keeps hearing noises from her neighbors and tries to figure out them out.  Students made guesses along with Nora using their knowledge and then compared them what was actually making the noises.  This is a very simple app and perfect for teaching inferences to first graders.

Second Graders–What fun it is for kids to see others misbehave.  Second graders first looked at an illustration from The Three Horrid Little Pigs by Liz Pichon and used their visible thinking skills to notices all the details and think about what they revealed about the characters.  Then I read this hilarious book and they used the thinking routine called Same, Same, Different to compare this version to the original one.

Third Grade–Using the thinking routine See, Think, Wonder third graders first looked at a slide of an illustration from Jack and the Baked Beanstalk and after quite a while noticing the details, they saw the similarities and differences between this story and the original one.  The illustrations is this book are fantastic and make it a perfect read aloud.  When we finished, they used the Same, Same, Different thinking routine to compare both versions. 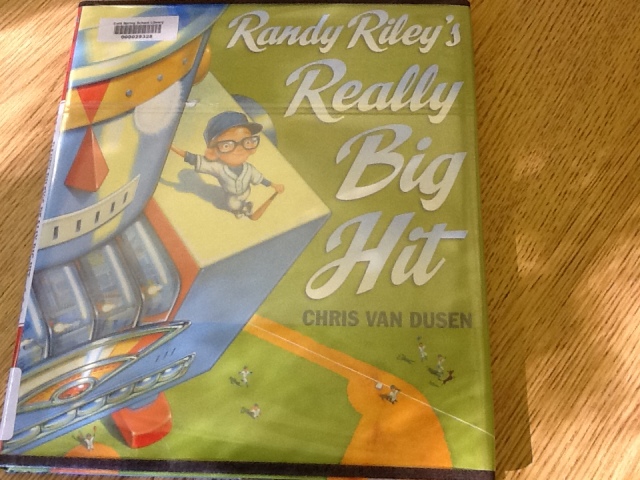 Fourth Grade–Using the thinking routine, Plot Prediction, fourth graders looked at an illustration from Randy Riley’s Big Hit by Chris Van Dusen and tried to figure out what was going to happen in the story.  Again, this is a great read aloud as the illustrations are fabulous.

Olive the Cat, our Library Mascot

Where are visitors coming from?